Sigrid studies the mysterious Lumholtz’s tree-kangaroo of Queensland Australia, and writes about the manage challenges for it’s survival in an increasingly urbanized and changing world. 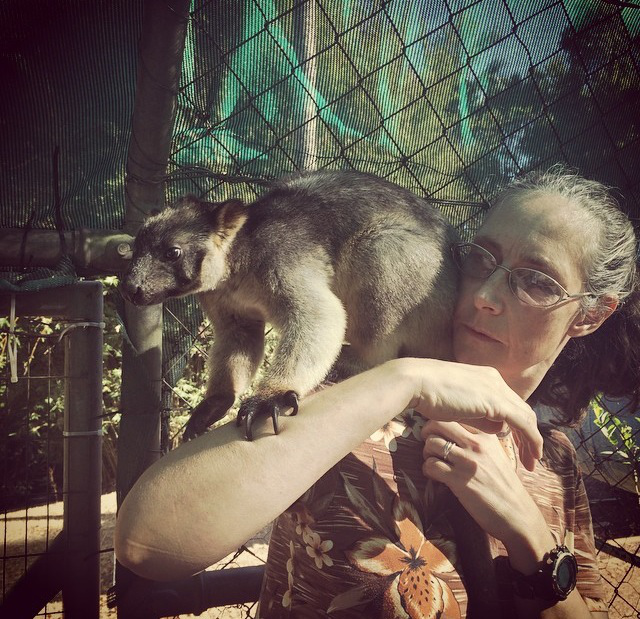 Bio: I am an ecologist by training with specialization in biology and behavior of mammals. I am specifically interested in habitat use of mammals; how they use available resources such as food and shelter. This determines their distribution.

Hi Sigrid, please tell us a little bit about yourself. What do you work on currently and how did you get into conservation?

Before I immigrated to Australia from Germany I worked on methods to control voles (which are a pest in Germany, as well as in the US; but they don’t exist in Australia). I worked on models to predict their population growth to prevent mass populations, and on the potential use of pheromones to stop the development of damaging populations at an early stage.

After two postdoc fellowships I came to Australia where I first worked as wildlife consultant in the company PavEcol of my husband. Here I became involved in conservation of various ecosystems of North Eastern Australia as well as feral pig control. Fauna surveys of dry woodlands let me discover the Mahogony Glider (Petaurus gracilis), a very rare marsupial that feeds on nectar from eucalypts and wattles, insects and sap of grass trees (Xanthorrhoea). Collections of dingo scats allowed the assessment of their impact on native wildlife of a large military training area near Rockhampton.

The SFS Centre in Australia is located on the Atherton Tablelands where large amounts of rainforest have been cleared in the past. Very special and often endemic species live here, as well, and conservation of these species is imminent as most of their habitat has been removed for cattle farming and agriculture. Without knowing what these animals require to survive, conservation planning is problematic and actions can be insufficient. My research concentrates on these aspects to support the conservation of the Lumholtz’s tree-kangaroo and the Yellow bellied glider.

Can you tell us about your study species or ecosystem, what it’s like and why it’s important?

Tree-kangaroos are very special animals that evolved from rock-wallabies and have adapted to a life in the canopies of rainforests. Here they move slowly around, eating mainly leaves and some flowers.

LTKs are territorial with home range sizes variable and depending on the type of rainforest they inhabit. For females home ranges between 0.7 and 2.0 ha have been reported while the average home range for males is 2.1 ha. Home ranges of females are non-overlapping while male’ home ranges can contain several female home ranges. Due to the clearing of rainforests (which is unfortunately still continuing in Far North Queensland), the population of LTKs may be under larger threat than we think. However, this species is only classified as ‘near threatened’ under the Queensland Nature Conservation Act 1992 and appears as ‘of least concern’ on the Red List of the IUCN. These classifications are mainly based on the assumption that large parts of LTKs’ habitat may be within the Wet Tropics World Heritage Area although detailed information on habitat requirements of this species is missing.

With my research I target the lack of knowledge that may have resulted in this mis-classification of the conservation status of this species.

"Tree-kangaroos are very special animals that evolved from rock-wallabies and have adapted to a life in the canopies of rainforests."

What issues are you hoping to address or discover with your research?

Firstly, we need to understand better which habitats this species is using; which types of rainforests it inhabits; does it need certain structural features of rainforests (for instance certain tree-heights, certain tree sizes (diameters), does it need forests with a lot of vines to climb); does it prefer areas with a certain amount of rainfall, with a certain maximum temperature? Answers to these questions I obtain by using data from community members who see LTKs and report the locations of these sightings.

You have also said that you need to study the negative impact of increasing urbanization on the species?

Yes, this threat relates to LTKs getting hit by motor vehicles when animals try to move to other rainforest patches across un-forested areas. They often have to cross roads and collide with vehicles which usually ends in road kill of these animals. In order to minimize this threat it is essential to identify hotspots at which road kills occur with higher frequencies.

Urbanization also causes LTKs to encounter introduced predators with which they have not co-evolved, such as domestic dogs. When LTKs are threatened they are descending from a tree and try to run away on the ground. This attempt often fails and they become victim to dog attacks. My research is concentrating here on the behavior of this species. Is it not able to recognize a domestic dog as predator? Why does it not stay in the canopy? Has it inherited an insufficient antipredator strategy from its ancestors, the rock-wallabies?

Can you tell us about your work to rehabillitate and release orphaned LTKs?

Due to encounters of LTKs with motor vehicles and domestic dogs, some tree-kangaroos come into care and get rehabilitated. Amongst them are joeys (= baby kangaroos) which are raised as orphans. They will be released into the wild. However, this species has an exceptionally long mother-juvenile relationship (up to 2.5 years!) which indicates that young tree-kangaroos learn a lot from their mother. How can this learning process be simulated by a human foster mother? Unless we know what young ones learn from their mothers, release programs can fail because young animals may be unable to survive in the wild. With my research I try to find out what juvenile tree-kangaroos learn from their mothers and how this helps them to survive in the wild.

Can you describe the day to day working conditions in the field?

Information on the where-abouts of LTK can be obtained by looking at the trunks of trees. When LTKs descend from a tree, they often leave three long scratch marks behind as they are descending with their bums first trying to slow down by clinging to the tree trunk with their sharp claws.

Moving in rainforests of Far North Queensland is not easy as it contains some nasty plants. One is a palm, called “wait-a-while”, which develops long tendrils with sharp hooks which hook onto your clothes and rip them apart if you continue to walk. You should “wait-a-while” and undo the hooks before proceeding. Another plant is a stinging nettle, which will send you in a hell of a painful night when you touch it. The pain, although less after the first night, can be felt for several months. These things have to be avoided and I remember once crawling on all four limbs underneath a group of stinging nettles (which were the size of small trees) with the end of the measuring tape in my mouth to get a straight line between two pints in the forest.

TOP: With an animal in an enclosure shortly before its release into the forest (credit to Leslie Garnese). BOTTOM: Ready for radio-tracking (two students on the left, S Heise-Pavlov on the right) (credit to Brian Schuh).

The SFS blog on tree-kangaroo research

The Tree-Kangaroo and Mammal Group

What are highlights of your work?

Students who come to our centre often have no experience with the rainforest and its inhabitants. Seeing their amazed faces when coming close to wildlife adds a lot of joy to my work.

Just recently I was in the middle of a chase of tree-kangaroos. I was observing a mother tree-kangaroo with its young; saw them both descending from a tree right in front of me; then saw the young climbing up on a small bush virtually next to me and sitting there while its mother was nowhere to be seen. Suddenly I heard crashing noises and trees were moving heavily on the other side of my observation point. Then I realized that this was the mother chasing a subadult male that must have come too close to the young or the feeding site the mother was going to move with her young. I heard a lot of clicking and grunting noises. After a while the mother turned up where the young was waiting for her and they started feeding on the leaves of the bush.

Just watching tree-kangaroos climbing is a delight. They are actually very clumsy climbers. When they hang on vines or trying to get down a big tree it looks often funny. Once I saw a mother tree-kangaroo descending followed by her young. Then the mother stopped on the trunk of the tree because she may have noticed me, but the young kept going. Because tree-kangaroos descend with their bum first, the baby ran straight into its mother placing its bum into her face and forced her to move on.

Lastly, are you optimistic for the future?

I am optimistic that we can get more knowledge of this animal to preserve it for the future. It might be a quite adaptable animal, but I am sure it needs our assistance to make it into a new world of changing climate.

Thanks Sigrid, and good luck! 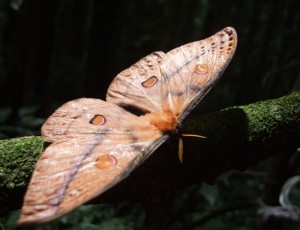 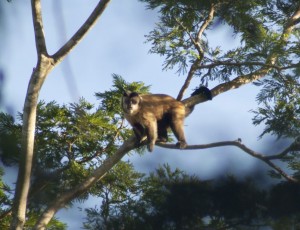 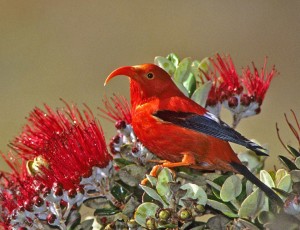 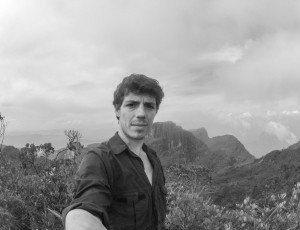 Martin Holland: Putting Together An Expedition To Central Kalimantan 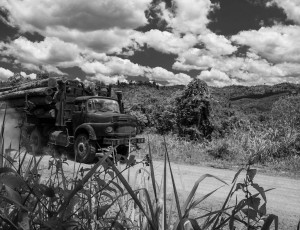 Dave Bennett: The Tropical Bats of Sabah
Browse All Articles